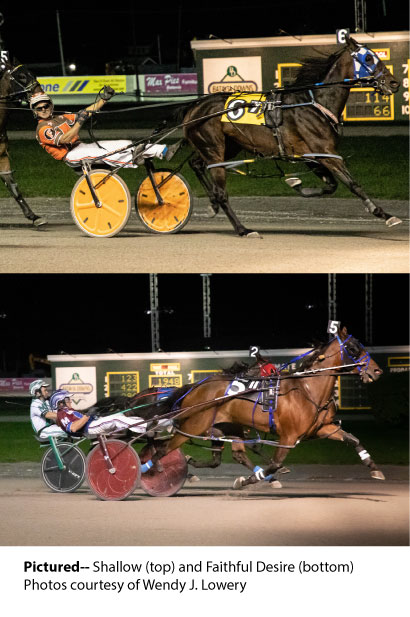 Batavia, NY — After winning two straight top paces for fillies and mares at Batavia Downs, Shallow was handicapped by post eight and seven the following two weeks and did not hit the board. This week she caught a short field but still had to dig deep to win the $15,000 Open I pace for fillies and mares on Wednesday evening (Sept. 14).

They were three deep into the first turn when Shallow (Ray Fisher Jr.) out-tussled So Admirable (Jim Morrill Jr.) for the lead motoring to the quarter in :28.2. But Morrill wasn’t content with a pocket trip and pulled So Admirable in front of the stands and took control of the top before they hit the half in :58.1.

Heading past the five-eighths, Tres Chic Bluechip (Kevin Cummings) pulled first-up but couldn not get closer than third on the rim as So Admirable was stretching out to a 2-¼ length advantage by the three-quarters. Heading into the lane, Shallow ducked into the passing lane while Tres Chic Bluechip went outside of So Admirable, making it three across the track. They stayed even for several strides but Shallow got the advantage in deep stretch and won by three-quarters of a length in 1:55.

In the $11,000 upper-level conditioned event also written for distaff participants, Faithful Desire (Jim Morrill Jr.) drafted perfectly behind Misty Memory N (Dave McNeight III) through fractions of :29, :59.3 and 1:27.3 before tipping off cover and pacing home in a stiff :27.4 to win by one-half length in 1:55.3.

Scoring her second win in the last three starts and sixth win of the year, Faithful Desire ($5.00) is owned by Crazy Parrot Farm and is trained by Shawn McDonough.

Faithful Desire was the fourth win of the night for Morrill, who led all drivers for output on Wednesday. Tom Mays led all trainers for wins with two.

Live racing resumes at Batavia Downs on Friday (Sept. 16) with post time at 6 p.m. Free full past performance race programs for all live race days can be downloaded by visiting the track’s website at bataviadownsgaming.com and clicking the “Live Racing” tab.