Gaston Guindon drove his first horse (which by the way was also his first win) in 1965 at Rideau Carlton Raceway in Ottawa, Ontario. The horse’s name was Altex Chief and that was the start of a thirty-nine year career in harness racing.

Guindon moved to the Western New York circuit in 1969 and had his first start at Batavia Downs Gaming & Hotel. It wasn’t long after that, his career took off. The horses he drove looked like a who’s who for years and included names like the venerable Mr. Coal, Keystone Spectrum, Harbor Smoke, E C Oakie, Willow Hill Boy, Mucalee Bunt, Hot Shot Hamde, Skipper Frank and River Mouse.

“The Gasser”, as he affectionately became known by the locals, won 3,080 races and earned $6.9 million dollars in purse money. From 1980 through 1987 he averaged 225 wins per season, with a career high 274 in 1987 and he was always one of the most sought after catch drivers on the WNY circuit. During his career, Guindon teamed with local trainer Dennis Cummings to win in excess of 700 races.

Besides harness racing, Guindon is a huge hockey buff and has played since he was only eight years old. Even when he was racing full time in his prime, he played hockey in organized leagues to keep himself in the best physical shape in order to be the best driver he could be.

Guindon formally retired in 2004 and is now living back home in Canada.

In 2011, Guindon was enshrined in the Upstate New York Harness Racing Hall of Fame by that Chapter of the United States Harness Writers Association and in 2012 he was inducted into the sports Hall of Fame in his hometown of Buckingham, Quebec.

Tonight his colors will be retired into our own Hall of Fame and join the likes of Jeff Gregory, Patsy C. Rapone, Bob Altizer, Ben Webster, Clint Galbraith and John Schroeder. And we couldn’t be prouder to add him as a member.

Let’s all give a big round of applause to driving legend, Gaston Guindon!

Clint Galbraith left his home in Ontario in the late 1950s and set up shop on the Buffalo/Batavia circuit. After a few years of getting established he scored his first dash title at Batavia Downs Gaming & Hotel in 1963. Galbraith was a force on the New York Sires Stakes circuit and campaigned a long string of “Kash” horses that were bred and raised at Rodney Farms that was then, and is now, run by Clint and his wife Barbara.

Galbraith will forever be synonymous with the legendary Niatross. Niatross won 37 of 39 starts as a 2- and 3-year-old and was named the Horse of the Year in 1979 and 1980. He was also harness racing’s first $2 million pacer and at the time, the fastest horse in the sport after posting a 1:49.1 time trial at Lexington in 1980. He won the Cane Pace, the Meadowlands Pace, Woodrow Wilson and the Little Brown Jug. But Niatross was only a part of his story.1988 saw another Galbraith student, Call For Rain, set a new world record for pacers over a mile track when he went 1:49.3 at Lexington. Call For Rain won the Breeders Crown twice along with a list of other major stakes during his career.

In recent years, Clint has been enjoying considerable success training and driving the Galbraith stable horses until early May when a barn accident sidelined him from action. He is currently recuperating and has been visiting the barn to oversee the operation’s activities.

Although successful at every level and racing throughout North America, Clint has always called western New York home since he first made the move here some 50-plus years ago.

During his career Clint as won 3062 races and amassed almost 20 million in purse earnings.

Jeff Gregory grew up in a racing family as his dad, Gary, operated a public stable since his birth. The family lived in Churchville, N.Y., just a stone’s throw away from Batavia Downs Gaming & Hotel. Jeff started driving there in the early 1980s before splitting his time seasonally between Vernon Downs and Pompano. His breakthrough to the big stage came in 2000 when he scored 317 wins, competing primarily at Yonkers Raceway. He received the USHWA Rising Star Award in 2002 and proceeded to prove the honor was well placed.

Today, Jeff is a top driver whose talents are sought on both the Grand Circuit and the New York Sire Stake circuit. These engagements keep him traveling across the state and racing at every major racetrack in North America.

John Schroeder was a western New York native who hit the racing scene in the early 1960s. He was considered to be one of the best “trotting men” of his era and plied his trade most notably from the mid 1960s through the late 1970s.

John handled the bulk of the work until his son Brian got his license and picked up many of the drives. Brian Schroeder went on to race Collier St Joey in the 1993 Hambletonian. John drove full time until 1981 when he scaled back his starts in the bike but continued to train.

During his career Schroeder found the winners circle 1,445 times and bankrolled $3.5 million in purses.

“Benny the Whip” Webster has a long string of champions that he tutored over the years including 1975 Little Brown Jug winner Seatrain, 1976 Oliver Wendell Holmes winner Oil Burner, 1981 Messenger Stakes winner Seahawk Hanover, 1984 Hambletonian winner Historic Freight and 1985 Kentucky Futurity winner Flak Bait. He also bred No Nukes which who would become one of the most influential sires of the era.

In a career that spanned six decades, Webster won 4,378 races and his horses earned purses in excess of $43 million dollars.

Patsy C. Rapone had been raised in the business and became one of the most proficient drivers to come out of Western New York, winning driving championships at Buffalo Raceway, Batavia Downs Gaming & Hotel, Northfield Park, The Meadows and Pompano Park. He had a natural ability to get everything out of a horse every time he got behind one and his talents were in high demand during his career.

Rapone was probably best remembered for his handling of the great Open trotter, Manfred Hanover
(Super Bowl-Miss Sue Hanover, 1:55.2M- $898,329). Rapone drove Manfred Hanover all over the east coast competing against the best Open trotters there were. 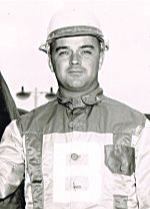 He set the bar high for his fellow horsemen through his multi-faceted operation. Besides training and driving his own stable, he was also his own blacksmith and designed different types of equipment including an early lift-type race bike that featured a very noticeable arch over the horse’s saddle pad. His many skills and innovations put his You and Me Stable near the top of the charts almost every meet.

Altizer had two nicknames that everyone knew him by — Mr. Cool and The Claiming King. The latter moniker referred to his uncanny ability to select cheap claimers and run them up the ladder. Time and time again, Altizer would turn mediocre horses into solid contenders while leaving his competitors shaking their heads. His most memorable horse to local racing fans was a pacing mare named Swifty.

A native of Kahoka, Mo., Altizer raced throughout the Midwest before settling into the Batavia/Buffalo circuit. But once here, he won multiple driving and training titles at both tracks. Unfortunately his career was curtailed by a heart problem that developed in the late 1980s and he was forced to roll back his schedule.

Bob Altizer scored 2,227 career wins and won $3,216,745 in purses. But more important than the numbers, he left an indelible mark on the racing scene that people still talk about.