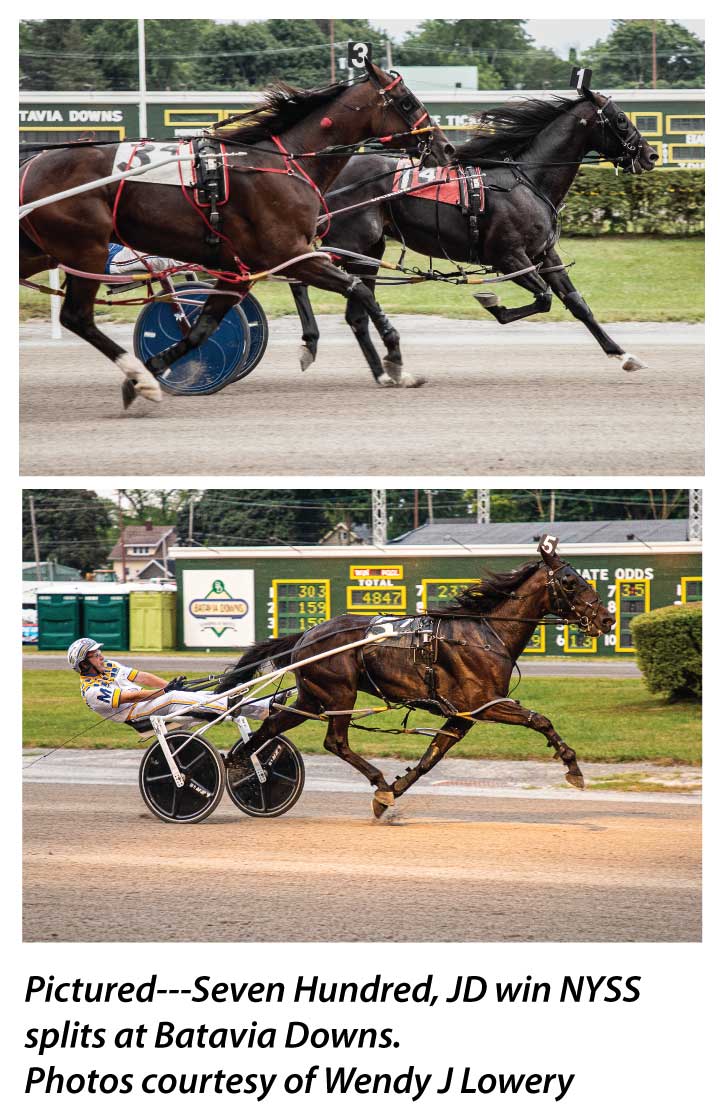 Batavia, NY — The “Glamour Division” of the New York Sire Stakes was well represented on Wednesday night (July 27) at Batavia Downs as 14 top 3-year-old pacing colts and geldings bred in the Empire State lined up in two $59,200 contests.

In the first division, Seven Hundred (Hunstville-Exclamation) took advantage of a perfect trip to score his second NYSS victory.

Twin B Deluxe (Jason Bartlett) went right for the lead while Seven Hundred (Jim Morrill Jr.) and Bounty Hunter (Jordan Stratton) tucked in behind for the journey. The horses remained in single file behind Twin B Deluxe through fractions of :27.3, :57.4 and 1:24.2 before rounding the final turn for home. It was there that Seven Hundred left the pocket, bolted past the tiring leader and held off a fast closing Roll With The Flow (Mark Macdonald) to win by three-quarters of a length in 1:52.4.

Seven Hundred ($9.70) is owned by Rick Berks and is trained by Jake Leamon. Blue Chip Bloodstock and Our Horses Sense Stable bred the winner.

Morrill ended the night with a total of four driving victories.

The second division saw NYSS 2-year-old champion JD (So Surreal-Park N Orchard) look like he’s ready to defend that title as he went gate to wire in victory.

Mark Macdonald left like a shot for the lead with JD while the heavily favored Pleaseletmeknow (Braxton Boyd) also left from seventh and dropped in third. With everyone seated, Macdonald grabbed leather and backed down the second quarter to :29.4, forcing Pleaseletmeknow to come first up just past the three-eighths. The two hooked up in turn three and matched strides in :27.2 to three-quarters, and then to the top of the stretch. But there, JD forged ahead and separated by 2-¾ lengths at the line and won in 1:52.4.

It was the third win in a row for JD ($5.40) who is owned by his trainer Ray Schnittker along with George Zitone and Melissa Beckwith. Zitone also bred the pacer.

Live racing resumes at Batavia Downs on Saturday (July 30) with post time at 6:00 p.m. Free full past performance race programs for all live race days can be downloaded by visiting the track’s website at bataviadownsgaming.com and clicking the “Live Racing” tab.