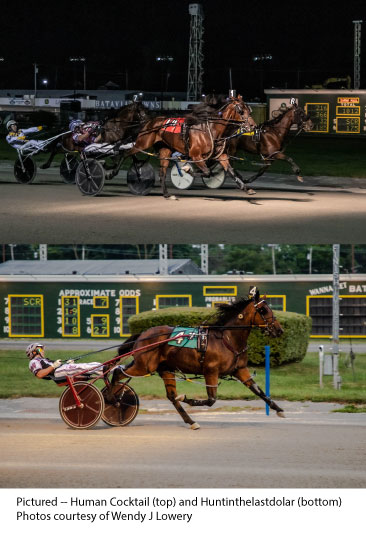 Batavia, NY — The New York Sire Stakes made their third visit to Batavia Downs on Wednesday night (Aug. 3) and featured the 2-year-old pacing colts and geldings who competed for a total of $107,000 in purses. The highlight of the night was when Human Cocktail (Huntsville-Losta Matzah) rallied late to win the second $53,500 division in 1:53.3 and set a new Batavia Downs track record for 2-year-old pacing colts.

Kid From The Bronx (Mark Macdonald) left hard and led by a gapped three length margin through panels of :27.1 and :55.3 with Human Cocktail (Jim Morrill Jr.) and Its A Me Mario (Jason Bartlett) trying to keep pace. Moving past five-eighths Its A Me Mario came with a rush and took the lead from Kid From The Bronx at three-quarters but the race was far from won.

Around the last turn Kid From The Bronx fought back and as the two were stacked up, forced Human Cocktail to go three-wide heading into the stretch. As Kid From The Bronx and Its A Me Mario began to tire, Human Cocktail rolled past them both in the middle of the track and pulled away to a ½ length victory over the fast closing Thunder Hunter Joe (Austin Siegleman) in 1:53.3, which was also a new lifetime mark.

After moving up from Excel “A” action, it was the first NYSS win for Human Cocktail ($3.90) and owner Stephen Demeter, who also bred the winner along with Blue Chip Bloodstock and Daniel Zucker. Gareth Dowse trains the colt.

Earlier there was a major upset in the first $53,500 split as Huntinthelastdolar (Huntsville-Eighthunrddolarbill) upended the 1-9 favorite American Fling with a strong stretch finish.

American Fling (Jason Bartlett) went right to the front while Huntinthelastdolar (Doug McNair) settled in second for a perfect trip. American Fling went :27.4 and :58.3 on top by three lengths at the half where Johnny Sack (Mark Macdonald) pulled first-over and tried to move into contention.

Live racing resumes at Batavia Downs on Saturday (Aug. 6) with post time at 6:00 p.m. Free full past performance race programs for all live race days can be downloaded by visiting the track’s website at bataviadownsgaming.com and clicking the “Live Racing” tab.