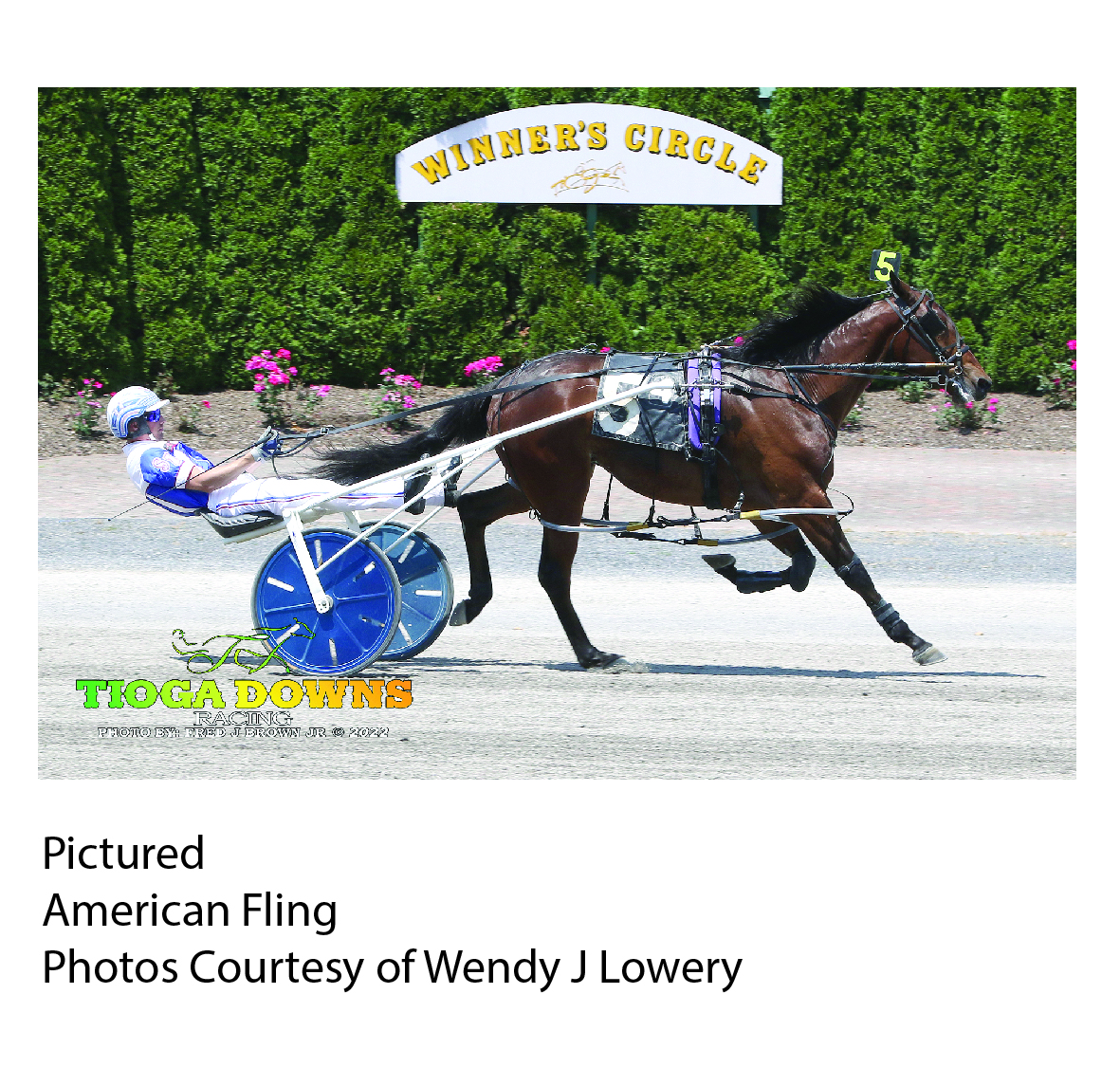 Batavia, NY — $107,000 is the targeted prize for 14 2-year-old pacing colts and geldings when the New York Sire Stakes makes its third stop of the year at Batavia Downs on Wednesday night (Aug. 3) and American Fling comes in undefeated in this series and is entered in the first of two $53,500 divisions.

American Fling (American Ideal-Feeling You) is currently the second richest 2-year-old pacing male in North America and is a perfect four-for-four in the NYSS. And he is only a nose away from being undefeated for the year as he finished second in his only non-winning start. He took a lifetime mark of 1:53.1 in NYSS action at Tioga Downs in June and followed that up by setting a new track record of 1:55.1 for age, gait and gender at Buffalo Raceway in July. Given his 1:53.2 victory at Saratoga last week, the Batavia Downs track record of 1:52.4 for a 2-year-old pacing gelding is not out of reach.

Looking to  prevent a fifth straight win by the probable favorite is Johnny Sack (American Ideal-Worldly Treasure) who is winless this year but not for lack of performance. In his last two out of three starts he cut the mile and just got caught to finish second twice in NYSS action while also finishing third at the Meadowlands in an overnight race, timed in 1:51.1.

Also Bandito Joe (Roll With Joe- Blind Faith) has good gate speed and an inside post, giving him a great chance to position himself strategically for this contest. His lifetime mark of 1:54.4 at Yonkers and speedy :27.4 last quarter last week at Saratoga shows he is capable of upsetting in this race.

In the second $53,500 split, Its A Me Mario (American Ideal-NF Salsa) has made four straight NYSS starts, finishing second in three of them. All three times were against American Fling who is in the other division Wednesday. Last week It’s A Me Mario drew post seven and chased a fast last half, and still was only beaten 2-¼ lengths for the win. With an inside draw here and his recent nemesis absent from the field, this looks like a good spot for him to grab his first win of the year.

Human Cocktail (Huntsville-Lotsa Matzah) likes to be near the front and brings his best game on the point. With a post one start here and coming off his fastest race time to date, it would appear that despite moving up from Excel “A” competition he will dictate the pace and be the one to catch coming home.

Also Ben Solo (Huntsville-Leah) won his last start which was in NYSS competition in 1:55 at Saratoga Raceway with a snappy :27.2 final quarter. He likes to come from off the pace and with a lot of early speed inside him, will get the opportunity to finish strong again.

Jim Morrill Jr. will drive Human Cocktail for trainer Gareth Dowse and leave from post one while Jason Bartlett will steer Ben Solo for trainer Steven Finkelstein from post five.

There are also two $15,000 Excel “A” series events carded as race four and eight. Post time for race one on Wednesday is 6 p.m.