Wheels A Turning makes it two in a row at Batavia 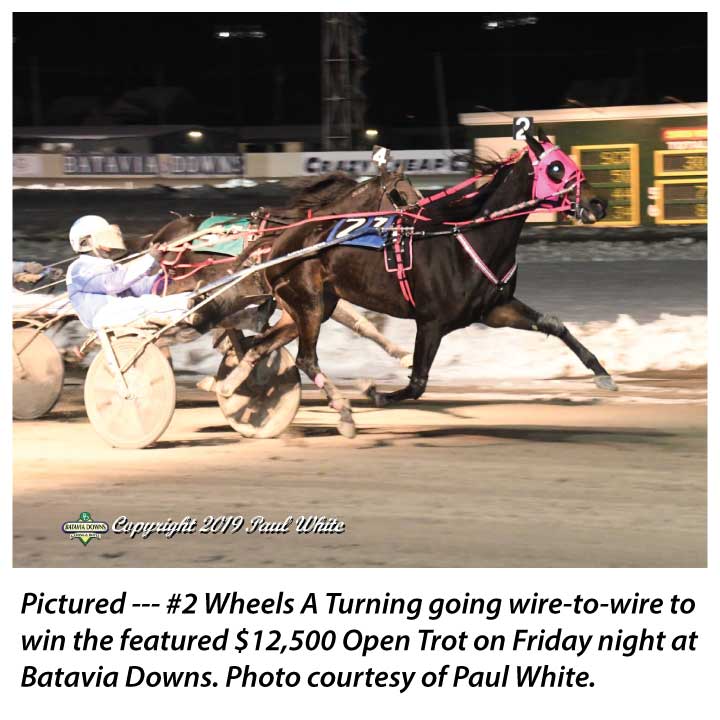 Batavia, NY — Wheels A Turning scored a narrow come-from-behind win in the feature trot at Batavia Downs last week. This week she took control off the gate and provided the same outcome in the $12,500 Open I Handicap trot over a sloppy track at the Downs on Friday night (11-15).

The feature field was scratched down to five and the lone mare, Wheels A Turning (Shawn McDonough) was the best off the gate, hitting the quarter in :30 flat. With no one applying any pressure, McDonough kept the fractions tepid; 1:00.4 to the half and 1:30 to three-quarters.

Rounding the far turn the pocket-sitting Fox Valley Veto (Billy Davis Jr.) and outside rusher Lougai (Ray Fisher Jr.) had the best shot for top honors and both were looking strong in pursuit. However under meaningful urging from McDonough, Wheels A Turning maintained her position and won by 1-¼ lengths in 2:00.1.

Wheels A Turning ($4.20) hit double-digit territory, scoring her 10th win of the year and hitting the $85,560 mark for purses. Allan Schmucker Jr. owns the mare that is trained by Sabrina Shaw.

Despite his name, everyone apparently knew how this story would end in the $11,000 Open II Handicap trot as the heavy 3-5 favorite Spoiler Alert (Renaldo Morales Jr.) led every step of the way to score an impressive 1-½ length win in 1:59.3. Celebrating the eighth win of the year by Spoiler Alert ($3.20) were owner Jeffrey Hayes and trainer Misty Carey.

Billy Davis Jr. remained hot and extended his already insurmountable dash win lead for the meet by winning four races on Friday. He now has 108 wins for the session. Renaldo Morales Jr. also had three wins in Friday.