Batavia, NY – Saratoga Raceway regular Saulsbrook Deputy shipped into western New York on Saturday night (Aug. 10) for the first time and immediately laid down the law after winning the $12,500 Open I Handicap pace at Batavia Downs.

Driver John Cummings Jr. took his time placing Saulsbrook Deputy on the lead but cleared by the quarter and opened up a two-length advantage at that point. The pair then proceeded to the half in a pedestrian :58.2 split before Lucan Hanover (Billy Davis Jr.) rolled up on the outside with Iammrbrightside N (Ray Fisher Jr.) on his back to apply some pressure for the second circuit. 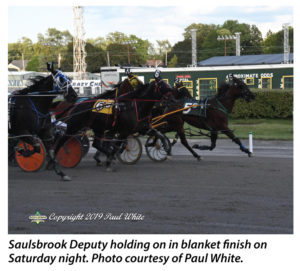 The top three horses maintained their positions to the three-quarters in 1:26.2 and then around the last turn where Saulsbrook Deputy was still two-lengths clear. But Iammrbrightside N tipped three-deep around the stalled Lucan Hanover and was barreling down the middle of the track and closing with every stride. Cummings was urging his horse all the way down the lane and Saulsbrook Deputy responded and stayed game to win in 1:55.1.

Saulsbrook Deputy ($5.70) scored his fifth win of the year for owner Kevin Quinn and brought his 2019 earnings to $49,491. Paul Zabielski trains the winner.

Drunkonaplane had the lead four-steps off the gate and relinquished that spot only momentarily before the quarter when he let Manceiver (Jim Morrill Jr.) clear. But he immediately retook the front and closed out the deal. Davis cut quarters of :56.3 and 1:24.4 before turning for home and holding off 51-1 shot Tullow N (Ray Fisher Jr.).

Drunkonaplane ($4), who now has six wins this year, is owned by Vogel and Wags Nags Stable Jack Rice and Adelphi Bloodstock. Maria Rice is the trainer.

Several horsemen and one horsewoman had very productive nights at Batavia on Saturday. Billy Davis Jr. and Jim Morrill Jr. both had four winners on the card while trainers Jackie Greene, Paul Zabielski and Maria Rice all sent two winners to the winner’s enclosure.