Undefeated in NYSS, Zero Tolerance rolls into finals at Batavia 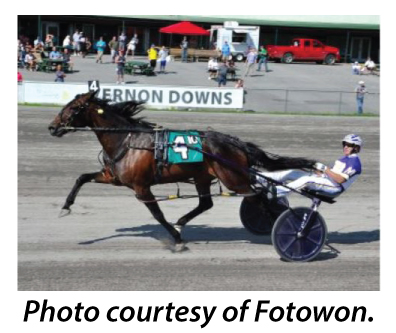 Batavia, NY — Zero Tolerance comes into her $225,000 New York Sire Stake (NYSS) Night of Champions final at Batavia Downs on Saturday (Sept. 14) with quite a body of work. She is the undefeated top point-getter (250) and highest earning 3-year-old pacing filly in her division ($177,500) and is currently the fourth richest filly in North America overall this year with $382,423 on her card.

She is a naturally talented filly that has been developed and managed masterfully by her Hall of Fame connections of driver David Miller and trainer Joe Holloway.

Zero Tolerance was a first crop daughter of Heston Blue Chip and was a $30,000 yearling purchase at the Lexington Select Sale in 2017 and it’s no surprise why her trainer Joe Holloway decided to buy her based on a couple successful fillies he had previously raced.

“I selected her for her maternal side. I had Somwherovrarainbow and Rainbow Room and they were both out of Rainbow Blue and I had good success with both them. And this filly is out of a sister to Rainbow Blue named Feelinglikeastar,” said Holloway.

Zero Tolerance started her 2-year-old campaign strong with a win at the Meadowlands in 1:51.3. Her first NYSS race was the following week where she finished second by a neck after cutting the mile.

After being sick and having three weeks off, she returned to the track and rattled off five consecutive wins including the Geers and Reynolds stakes at Tioga Downs and NYSS legs at Vernon Downs and Monticello Raceway.

She did not race in the NYSS final, rather closed out the year with an aggressive Grand Circuit schedule where she won the Bluegrass at the Red Mile before finishing second in the Breeders Crown at The Downs at Mohegan Sun Pocono and the Three Diamonds at the Meadowlands.

This year, Zero Tolerance came out of the gate and won her first three NYSS races by a combined 16-3/4 lengths. She hit the Grand Circuit again for two starts finishing second in the James Lynch Memorial at Pocono in 1:49.3 and fourth in the Mistletoe Shalee at the Meadowlands. She returned to New York and won the Empire Breeders Classic at Tioga in a lifetime best of 1:50.2 and two more NYSS races at Saratoga and Batavia to go five for five in the series.

“She’s been good in the NYSS this year so far. Each time she has raced she’s performed for us and that was the plan. When she looked like she was dominant, I was going to go to the Jugette. But where it’s New York, and it’s such good money, basically close to the same money as the Jugette after you’ve got to go heats, we decided to race here instead,” said Holloway.

In that last start at Batavia, Zero Tolerance got away third to the half before pulling with cover up the backstretch and simply paced away from the field with no urging down the lane to win easily in 1:54.2.

There has been almost three weeks between starts for Zero Tolerance but her routine didn’t change that much.

“As far as the time off, I usually don’t train her too much anyway. So I trained her real hard a week out and I trained her lightly on Wednesday (Sept. 11). The seven hole doesn’t help us in the final but she’ll be alright,” said Holloway.

“Overall she’s a nice filly although she gets a little bit high strung now and then. But a lot of my better fillies have been that way. Probably the biggest thing she does this year is she’s bad in the winner’s circle. She kicks and I don’t want her hurting herself so we haven’t been in the winner’s circle to long when she gets there.”

The NYSS final will not be the last race of the year for Zero Tolerance. Holloway indicated that she would be going to Lexington for two weeks before the Breeders Crown and the Matron.

Zero Tolerance comes into the NYSS finals as one of the richest participants this year with $868,236 made lifetime and she will be looking to substantially add to that total on Saturday night.

Peter Kleinhans will be the tracks guest host and handicapper for the in-house and simulcast broadcast and Heather Wilder will be in the Purple Haze Winner’s Circle interviewing the winners and all their connections after each stake race.