Batavia, NY —  Sir Pugsley took full advantage of a rare inside post, a favorable trip and a failed favorite to light up the tote board in the $12,500 Open I Handicap pace at Batavia Downs on Saturday night (Nov. 30). 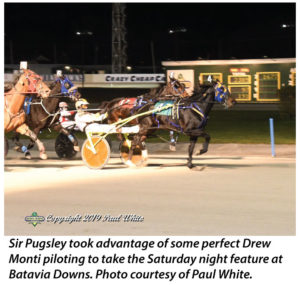 Driver Drew Monti tucked Sir Pugsley in second behind last weeks winner Howmac Dancer (Renaldo Morales III) going to the quarter as the heavy favorite Crocketts Cullen N (Larry Stalbaum) failed to negotiated the first turn and made a break as a result. Stalbaum gathered his 1-9 shot back together and rushed up the rim to pull close to the leader and remained there for the rest of the mile.

The top three horses continued to pace in that order — Howmac Dancer on top, Sir Pugsley in the hole and Crocketts Cullen N on the outside — to the half in :57 and three-quarters in 1:25.4. When they rounded the last turn and headed into the stretch, Crocketts Cullen N faded just enough to allow Monti to extract Sir Pugsley off the pegs and he came out with a full head of steam and mowed down Howmac Dancer in deep stretch to win by a length in 1:55.2.

It was the seventh win of the year and third of the meet at Batavia Downs for Sir Pugsley ($18.80) who has now earned $88,270 this year for owner Robert Woodburn. Patrick Shepherd trains the winner.

In the co-featured $11,000 Open II Handicap, Rise Up Now (Shawn McDonough) tripped-out behind the front-running Brunello N (Drew Monti) for over 7/8th’s of a mile before popping the deuce mid-stretch and brushing to the lead at the beam to win in 1:56.2.

It was the fifth win of the year for Rise Up Now ($34.80) who is owned and trained by Steve Andzel.

Driver Shawn McDonough continued his hot streak in the bike winning three more races on Saturday and he rewarded his backers with premium mutuels with all three. His longshots included Dark Horse ($44.60), the aforementioned Rise Up Now and Willey Bite ($26.40). In the last three nights McDonough has won seven races.

Racing resumes at Batavia Downs on Friday (Dec. 6) with post time at 6 p.m.