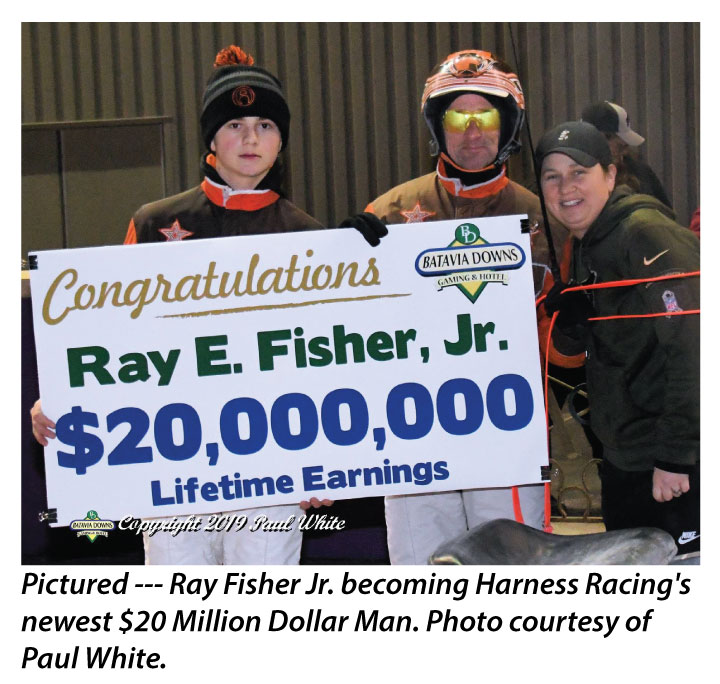 Batavia, NY — It was a big night for driver Ray Fisher Jr. on Friday (Nov. 29) as he hit a major career milestone by surpassing the $20 million mark in career earnings at Batavia Downs after winning with trotter Lady Justice who is owned and trained by his wife, Ryan Swift.

Fisher was joined in the winner’s circle by his wife Ryan and son Kyle for a special presentation made by Batavia Downs Director/General Manager of Live Racing Todd Haight.

The top races on Friday night were both trots and each yielded convincing winners.

In the $12,500 Open I Handicap, Rockefeller Lindy (Mike Baumeister) tripped-out behind the frontrunning Majestic Kat (Billy Davis Jr.) until mid-stretch when Baumeister pulled right line, cleared and hit the wire three-quarters of a length ahead in 1:58.4.

It was the fourth win of the year for Rockefeller Lindy ($20.60) who has now earned $46,093 for owners Burke Racing and Weaver Bruscemi. James Clouser Jr. trains the winner

Then in the $10,000 Open II trot, newcomer Chuckabuck (Drew Monti) toured the facility on the front end from start to finish and won by 2-1/2 lengths in 2:00. Scoring his seventh win of the year, Chuckabuck ($7.40) scored his first for new owner Carl Monti. Darrin Monti trains the winner.

The Downs leading dash driver Billy Davis Jr. lit it up again, winning four races on the card. He now has 123 wins for the meet, 42 ahead of second place Jim Morrill Jr. Shawn McDonough also had a good night winning three races each. Angus McDonald and JD Perrin led all trainers Friday with two wins each.

Racing resumes at Batavia Downs on Saturday (Nov. 30) with post time at 6 p.m.