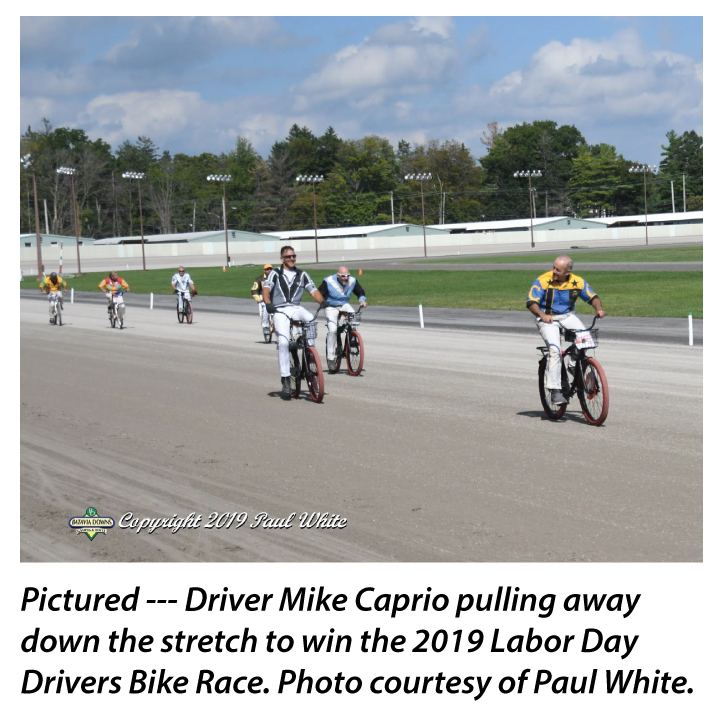 Batavia, NY — Labor Day at Batavia Downs has meant two things for over 30 years. A matinee card of harness racing and eight local drivers mounting two-wheeled bicycles to compete for bragging rights for a year in the annual driver’s bike race.

This year, longtime local horseman and Oakfield, NY native Mike Caprio got the jump off the gate, took the lead and methodically made his way down the lane and to the wire to win by three-lengths over Rock C. Vinci. John Cummings Jr. was another length back in third.

The clocking for the eighth of a mile was unofficial but believed to be a new lifetime mark for Caprio, who is a previous winner of this event.

Caprio currently sits at 1,999 career driving wins and should reach that coveted milestone this week. However this win did not count towards that total.

Caprio returned to the winner’s circle and drew eight random names from those attendees who selected him to win the race and gave away the eight bikes used in the event. That giveaway was courtesy of Crazy Cheap Cars of Oakfield.

There is no racing at Batavia Downs this Wednesday due to today’s Holiday card. Live racing resumes at the Downs on Friday (Sept. 6) at 6 p.m.