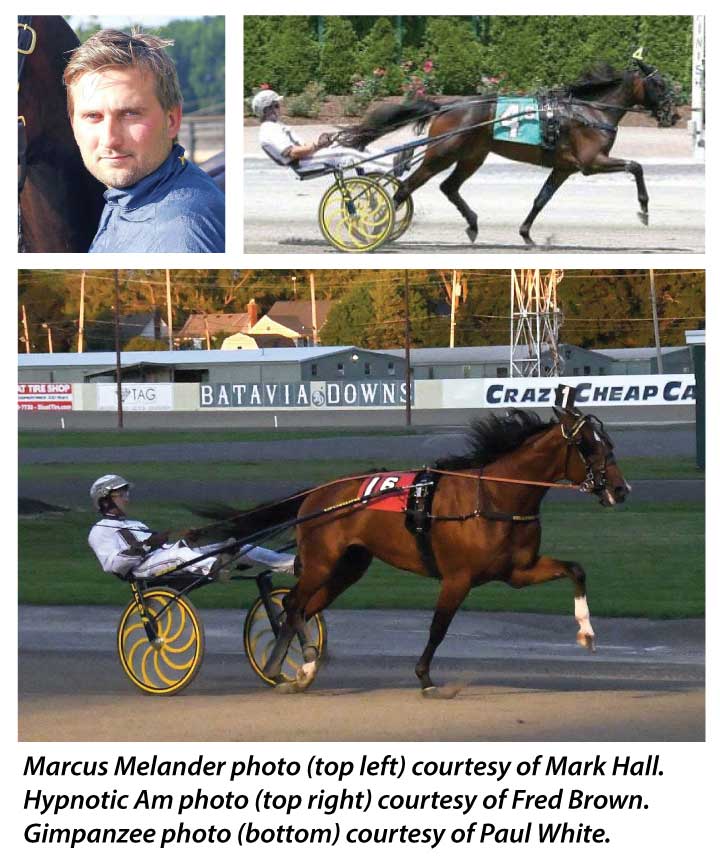 Batavia, NY — Marcus Melander has come a very long way in harness racing in a very short amount of time. After making the move to North America from his home in Sweden at the age of 21 to work for Hall of Fame trainer Jimmy Takter, Melander went off on his own and hasn’t looked back.

Over the last five years, Melander’s stable has won in excess of $7.8 million in purses, had five trotters reach the Hambletonian final and was awarded two year-end Dan Patch Awards for divisional winning horses.

Melander himself received the 2018 Dan Patch Rising Star Award this past February in Orlando, Florida in recognition of his exceptional early career accomplishments.

This year two of the best horses in his stable just happen to be New York-bred and both are undefeated in their New York Sire Stake (NYSS) starts this year. They are 3-year-old trotting colt Gimpanzee and 2-year-old trotting filly Hypnotic Am and they both will be competing in the $1.8 million NYSS Night of Champions at Batavia Downs on Saturday (Sept. 14).

In his freshman season, Gimpanzee was undefeated going nine for nine. He swept the NYSS to become the 2-year-old champion, won the $600,000 Breeders Crown final and amassed a total of $591,358 for the year. That earned him the 2018 Dan Patch Award for 2-year-old trotting colts.

This year Gimpanzee started out by running up his lifetime undefeated streak to 13 before joining Melander stablemates Greenshoe and Green Manalishi S in the Hambletonian final.

Gimpanzee got parked out from post seven in his elimination and finished fourth. He then drew post seven again in the final, went a similar trip and finished third. He closed very well in both starts (:26.4 and :26.2) and was only beaten a length in each race. Melander reflected on those starts as he was preparing him for the New York finals this weekend.

“He went tremendous in both races and finished strong in both despite having the seven hole. If he had a little better post in the final I think he could win the race because he was flying home. But he raced real good that day and we could not be more happy. He showed everyone that he is fast enough,” said Melander.

Despite the task of racing two heats in one day, Gimpanzee came out unfazed and continued his winning ways at Batavia on Saturday (Aug. 24).

“He came out of those heats better than I thought but that doesn’t surprise me. He’s very laid back and easy on himself. It was good that there were no eliminations for the Yonkers Trot so we could bring him up to Batavia that week and get some more points and get some experience around that track. It was a great surface to race over at Batavia and he got around it very well,” said Melander.

After the New York final, Gimpanzee will be going down to the Red Mile for the Bluegrass Series and the Kentucky Futurity with his sights strongly focused on a second Breeders Crown championship.

Stablemate Hypnotic Am hasn’t visited Batavia yet this year because she was busy winning the $310,000 James Doherty Memorial at the Meadowlands the week her division competed there.

Hypnotic Am was bred by her owner Courant and was such an impressive yearling that they sent her to Melander to train, rather than the sale last fall. And clearly that has worked out well for all involved.

“She trained down good and every start she seems to get better and better. She has no problem doing the work herself; she has speed, she has stamina, she has everything a good horse should have,” said Melander. “She went a big mile in the Doherty (1:53), a track record at Yonkers (1:56.1) and was a was very strong as a wrapped-up winner at Saratoga in 1:54.4 over an off track. She’s a very nice filly.”

Her performances this year speak volumes. She is currently the fastest 2-year-old trotter overall in North America, richest 2-year-old trotting filly and the second richest overall behind Real Cool Sam, who has raced two more starts to this point and is coincidentally also undefeated at 8-8.

After the NYSS final, Melander said she may head down to Lexington for the Grand Circuit races as well, but that will be a decision he makes later. But one thing is for sure, She will compete in the Breeders Crown.

“We may go to Kentucky, depending on how she races and comes out of the race this week. I like to be careful with the 2-year-olds because they can get sick and that can happen very easily when they travel.”

Both Gimpanzee and Hypnotic Am are by Chapter Seven out of a granddaughter of Muscles Yankee. It’s a cross Melander likes and his trotting star of two years ago Fourth Dimension, who was a four-time NYSS winner and the 2017 Dan Patch Award 2-year-old trotting colt of the year, had the same.

Melander looks to continue his success in New York in the coming years, stating the program helps develop young talent.

“I think it’s a very good series and although there are a lot of half mile tracks, most of them have good surfaces. Many are very soft for the horses and that helps a young horse a lot. And as long as the tracks are good, that’s good for the horse’s futures then it works great to have them in this program,” said Melander. “I will be shopping for New York horses at the sales this fall and if I can find something I like I will definitely try to buy them. I like the New York circuit. It’s good money and a good program for us.”

The draw for that card is on Wednesday (Sept. 11) at noon and will be live streamed on the NYSS website as well as both the NYSS and Batavia Downs Facebook pages. Batavia native and New York State Assemblyman Stephen M. Hawley will serve as the honorary drawmaster.

Peter Kleinhans will be the track’s guest host and handicapper for the in-house and simulcast broadcast and Heather Wilder will be in the Purple Haze Winner’s Circle interviewing the winners and all their connections after each stake race.