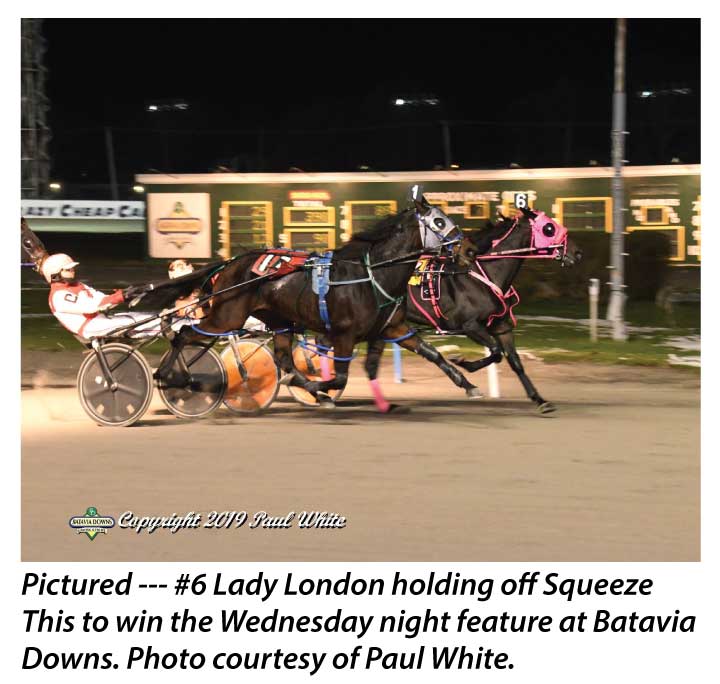 Batavia, NY — Just to prove last week’s 5-¾ length win was no fluke, Lady London moved up to the top class and wired the field again in the $12,500 Open I Handicap pace for fillies and mares at Batavia Downs on Wednesday night (Nov.20).

Driver Ray Fisher Jr. was decisive in strategy and repeated last weeks script; he left strong with Lady London and called out every quarter. They went :28 to the quarter and :57.1 to the half with the field in single file, and then rolled to the three-quarters in 1:25.4 with Squeeze This (Billy Davis Jr.) following close in the pocket and the favored HP Sissy (Drew Monti) winging it first-over on the rim.

Coming off the final bend HP Sissy stalled and Squeeze This popped the deuce and was in full flight coming for home. She made up ground all the way down the lane but despite her valiant attempt to close the gap, Squeeze This fell a nose short to Lady London who stayed tough and won in 1:56.

In the $9,000 under-feature, Little Joke (Billy Davis Jr.) dropped from Open II company and looked impressive as the heavy favorite with a wire to wire 1-1/4 length victory in 1:57.1. The eighth win of the year for Little Joke ($2.40) pushed her earnings to $74,428 for owners Vogel and Wags Nags Stable and Jack Rice. Maria Rice trains the winner.

Ray Fisher Jr. and Denny Bucceri led all drivers on Wednesday with three wins each.