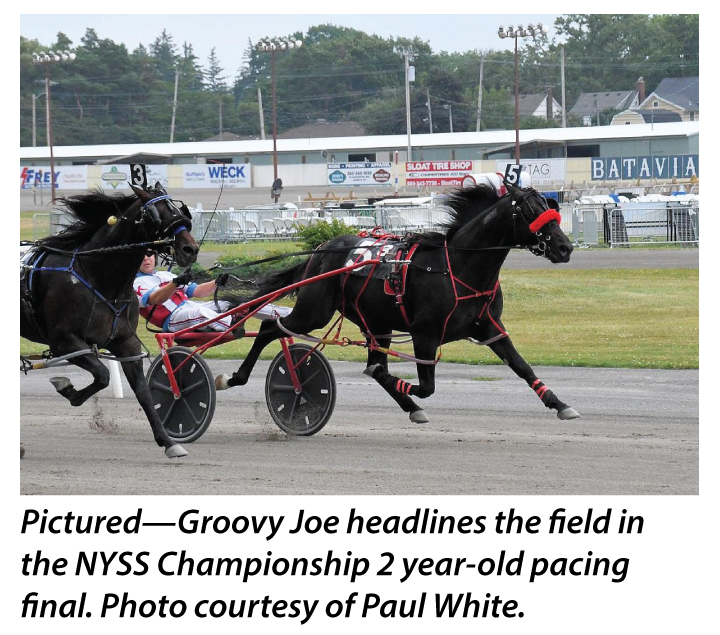 Batavia, NY — The top 2-year-old pacing colt heading into the $1.8 million New York Sire Stakes (NYSS) Night of Champions at Batavia Downs on Saturday (Sept. 14) proves you don’t have to be rich to be successful in harness racing if you do your homework.

Groovy Joe (Roll With Joe-Chotat Milk) p,2,1:52f ($174,595) was a $17,000 purchase at the 2018 Goshen Yearling Sale and has turned out to be quite a find. With the bulk of his 2-year-old campaign completed, he currently sits atop the NYSS standings for points (337) and earnings ($155,270) for his age, gender and gait, has seven wins in nine starts with two seconds overall and started it all off with a five-race winning streak.

His body of work ranks beyond the state border too. Groovy Joe is currently one of the sports best first-year performers sitting third in earnings among all 2-year-old male pacers in North America and has paced the tenth fastest mile of all freshman pacers after his recent career-best outing of 1:52 at Tioga Downs.

Blake Macintosh trains Groovy Joe and co-owns with the Hutt Racing Stable. Macintosh is the one who picked out the colt and knew all along that he’d be a good one.

“I liked him when I saw him. He was well built, well bred and was my pick of the sale,” said Macintosh. “And he turned out to be everything I thought he would. He broke easily and trained down well and he’s become very smart and professional with his work.”

The colt’s first five races, all of which were wins, came over half mile tracks. Macintosh stated he seemed to thrive there and progressed sharply through those starts.

“He’s not a big horse and he gets around a half-mile track perfectly. You could see him get stronger with each of those wins and he came home faster each week as he went along. The race at Buffalo was what really impressed me; when he flew home in a :57.2 back-half,” said Macintosh.

Groovy Joe has continued to improve and show his maturity after just winning back to back starts at Tioga in 1:52.4 and 1:52 flat.

Macintosh is no stranger to success on the NYSS circuit and used the series to educate and develop his millionaire star Courtly Choice (Art Major-Lady Ashlee Ann) p, 3, 1:47.1m ($1,285,054).

Courtly Choice won two races in the NYSS at two in 2017 but did not compete in the final. However he came back at three and won all his races in the state series, but he also won the Meadowlands Pace and the Empire Breeders Classic. He still did not race in the NYSS final in 2018 but that was because he was busy winning the Little Brown Jug that week instead.

Are major stakes in the future for Groovy Joe? His trainer thinks so.

“Besides racing in the NYSS, we are going to pay him into several Grand Circuit events next year and point him towards the North American Cup. I was very excited to win the Jug but I’d love to win the Cup. It’s at my home track and in my own backyard,” Said Macintosh.

The draw for that card is on Wednesday (Sept. 11) at noon and will be live streamed on the NYSS website as well as both the NYSS and Batavia Downs Facebook pages. Batavia native and New York State Assemblyman Stephen M. Hawley will serve as the honorary drawmaster.

Peter Kleinhans will be the track’s guest host and handicapper for the in-house and simulcast broadcast and Heather Wilder will be in the Purple Haze Winner’s Circle interviewing the winners and all their connections after each stake race.