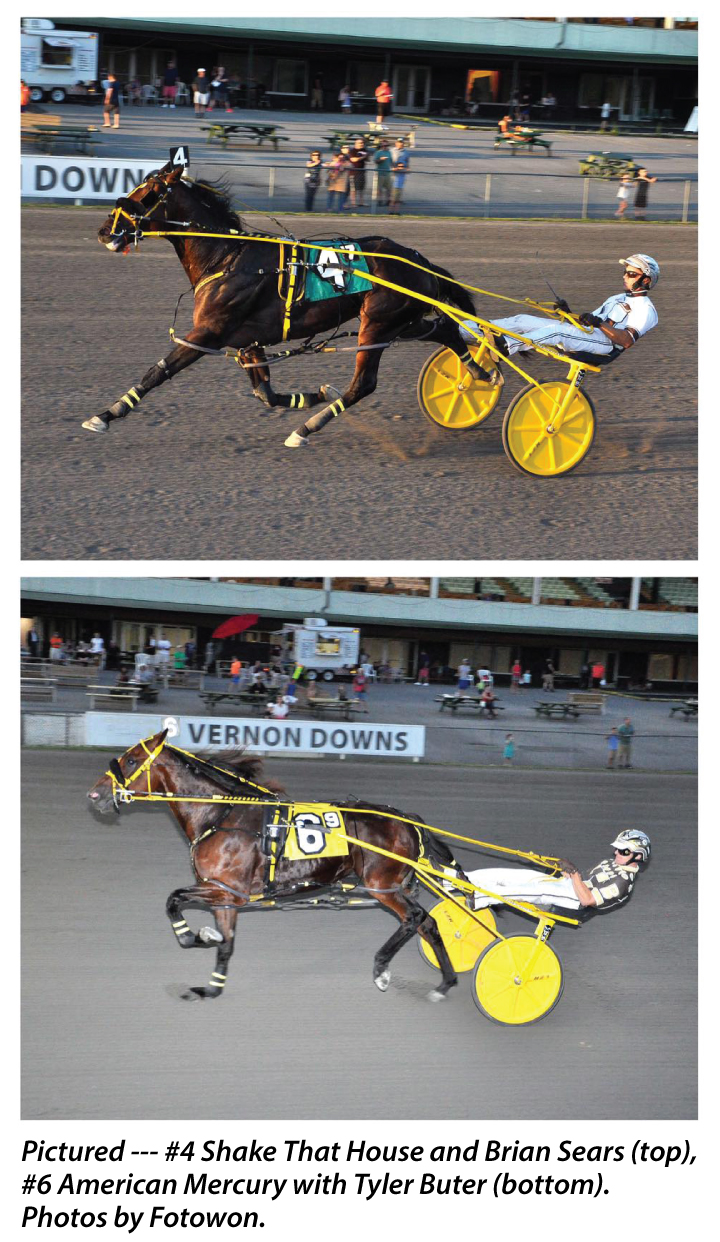 Batavia, NY — It will be a homecoming of sorts for Akron, New York native Chris Oakes when he brings two powerful members of his now Wilkes-Barre, PA based stable to Batavia Downs on Sunday (Aug. 4) to compete in two divisions of the New York Sires Stakes (NYSS) for purses totaling $117,400.

In the first $58,700 division (carded as race one) Oakes will start Shake That House (American Ideal-Shake That Junk) as the morning line 6-5 favorite.

Shake That House only has two starts in the NYSS this year and both were wins, but he has also been competing successfully on the Grand Circuit.

After drawing the outside at Mohawk Park in an elimination of the North American Cup, Shake That House got parked for most of the mile and did not qualify for the final.

But the resilient colt bounced back to win his next start which was an elimination of the Max C. Hempt stake at The Downs at Mohegan Sun Pocono. After taking the lead past the half, Shake That House led the rest of the way and won in 1:49, which was a lifetime mark. The following week in the $500,000 final he left from post seven, went right to the front and won handily in 1:49.2.

Then in his most recent start, Shake That House was in a NYSS event at Vernon Downs and sat third to the half before pulling to take the lead before the three-quarters and then paced away from the field in 1:47.4 which was another new lifetime mark for him and also a new track record at Vernon for 3-year-old pacing colts.

For the year Shake That House has six wins in seven starts and has earned $336,400 to date.

Tyler Buter will be in the bike behind Shake That House on Sunday and will start from post five. Also, Shake That House will be coupled in a stable entry with Buddy Hill (Roll With Joe-Lessofit Hanover) for betting purposes.

Hickfromfrenchlick (So Surreal-My Girl’s A Star) and Major March (Art Major-March You And Me) who finished second and third in that track record mile at Vernon are also in this division starting from post one with Matt Kakaley and post two with Jason Bartlett respectively.

American Mercury has raced exclusively in NYSS races this year and has won four of the six he entered, finishing second and third in the other two. He started the year racing from off the pace but has since found as much success on the front end.

He took a new lifetime mark at Yonkers in June winning easily in 1:50.3 over the half-mile strip and it set a track record for 3-year-old pacing geldings and also tied the all-age seasons mark at the Hilltop.

In his next start at Vernon Downs American Mercury lowered his personal best again, touring the facility in 1:49.4 and winning by two lengths.

American Mercury has five wins in seven starts this year and has bankrolled $182,493 as a result.

Tyler Buter gets the call on American Mercury as well and drawing post two off the gate.

Magic Joe Lindy (American Ideal-Lindy’s Bandita) who finished third to American Mercury in that sub-1:50 mile at Vernon should be his main competitor here and starts from post five with Drew Monti up.

The track record for the 3-year-old pacing male division at Batavian a Downs is 1:51.2 and that mark is serious jeopardy with perfect weather being forecast for Sunday.

Also at Batavia Downs for the matinee card is Dollar Sundays which continues this week. Sahlen’s Hot Dogs, draft beer and sodas are only $1 each from noon until the last race at the Homestretch Grille.