Batavia, NY — After only one year of competing full time on the New York Sire Stake (NYSS) circuit, Tyler 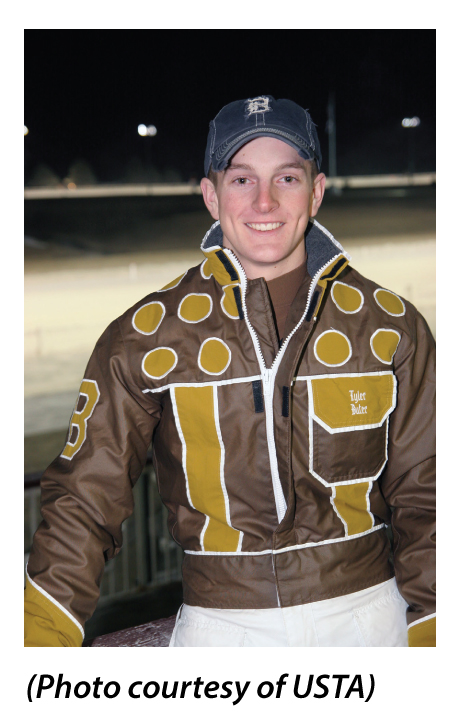 Buter claimed his first driving title in the series as its top reinsman for both wins and earnings. In a category long dominated by Hall of Famer Wally Hennessy and Jim Morrill Jr., Buter hopes to become as familiar a name driving champion New York-bred Standardbreds as theirs.

Buter will be a busy man on Saturday (Sept. 14) when he returns to Batavia Downs for the $1.8 million New York Sire Stakes (NYSS) Night of Champions.

A native of Michigan, Tyler Buter has been one of the most consistent and sought after drivers in the northeast over the past 10 years. The 34-year-old Manchester native started driving at age 17 and got his first win at the Gladwin Fair in his home state in 2002 with a horse named I Luv My Pasture.

Earlier this year he hit his career milestone 3,000th win with Daddy Let Me Drive at the Downs at Mohegan Sun Pocono and in between he has spent time perfecting his craft at tracks in Michigan and Chicago before moving to Monticello, Yonkers and the Meadowlands while earning over $38 million in purses.

Currently calling the Downs at Mohegan Sun Pocono home, Buter still does often compete at the other venues. But an event that occurred this past February that affected both his personal and professional life prompted him to make a career-changing decision.

“Earlier this year my longtime owner and friend Gene Oldford passed away and a lot of things changed. After discussing it with my family I decided to get away from running a stable and focus on driving full time,” said Buter. “And as it turned out, many of the trainers I have been driving for had horses in the NYSS and I made the decision to commit to making all the dates and it’s worked out well for me.”

Buter had made some sporadic starts in the series before this year but 2019 was the first time he committed his whole summer to it.

“There are some excellent horses coming out of New York; the breeding is great and the competition is second to none. I’ve enjoyed this year and look forward to driving here again next year,” said Buter.

And based on his results in the bike, the connections of the New York-bred horses he drives are looking forward to it as well.

Buter posted 25 wins out of 87 starts and had a stellar .390 Universal Driver Rating (UDR) as a result of hitting the board over 50% of the time in the NYSS and that gave him just over $1 million in purses for those starts.

When asked about winning the driving title, Buter was quick to praise his competition and not focus on himself.

“Jason (Bartlett, 2017 leading driver) and Jimmy (Morrill, 2018 leading driver) and myself have put in a lot of miles this year and it was a great competition right to the end. All the guys who compete here are tough and make you earn every dollar and that makes you better as a driver,” said Buter.

Although he missed a lot of starts with overnight horses during the summer, Buter realized something he truly enjoys in his new role.

“I really like racing 2- and 3-year-olds. I like helping them to develop and seeing when the light bulb comes on in their head as they mature. That’s when they finally get it and move forward. And it’s very gratifying to know you had a part in that growth.”

The draw for that card is on Wednesday (Sept. 11) at noon and will be streamed live on the NYSS website as well as both the NYSS and Batavia Downs Facebook pages. Batavia native and New York State Assemblyman Stephen M. Hawley will serve as the honorary drawmaster.